In the industry I work in, it is not uncommon to get a call from head hunters every once in a while. In fact, it is one of the more legit ways to land yourself a job without actually actively looking if you have got the right connections. I think I would be a little worried if no one ever calls me for “a chat” in a span of a year!

In the recent months however, there had seemed to be an influx of calls from recruiters from all over. Not surprising, given that there has been a shortage of talent in the industry of late as employers are constantly looking for people to fill in a position. I also suspect that one of the primary reasons for head hunters calling on me was simply because I had updated my profile in LinkedIn not too long ago.

Now. Being head-hunted can boost one’s ego, and the rule of the thumb is to never, ever pissed off a head-hunter as they would be one of the most important people who could help you through your career. The least you could do is be nice. Loud and clear, kabish?

However, that being said, I wonder if anyone ever felt slighted by a so-called head-hunter who couldn’t really be bothered to do their homework properly before even approaching a candidate and practice proper ethics when calling on one.

Look. I’m not about to sound all high and mighty here, and I do appreciate the work that a head hunter does and I do have the utmost respect for what they do. But, I was truly taken aback, no wait! appalled would be the most appropriate word to use, that a recruiter had sent me a message through someone else’s account. Case in point: 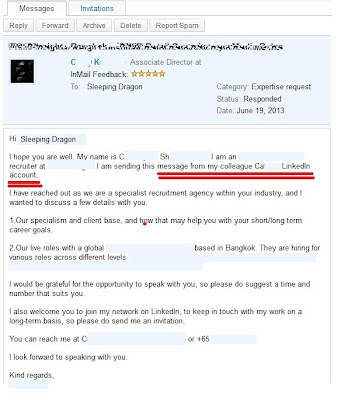 My first thought was: How is using someone else’s account even right? Couldn’t you spend a little bit of time signing up for your own account? Secondly, how do you even dare suggest to “keep in touch on a long-term” basis” when you are not even using your own email address to send me a message? Thirdly, who should I be replying to – you or your colleague?

I probably come from an old school of thoughts when it comes to business ethics, and so the practice of using another person’s account, no matter how casual it sounds, unless super-dire, does not sit very well with me; especially so when it was the initial contact.
I hate to sound petty, but I was practically seething and was contemplating to ignore the message. However, the rule of thumb when dealing with head hunter prevailed.  It took me a day to think about how I should be replying to him without sounding like I was attacking him, but still able to drive the message that I was none to please as to how he initially conducted business.
I then shot a reply as follows: 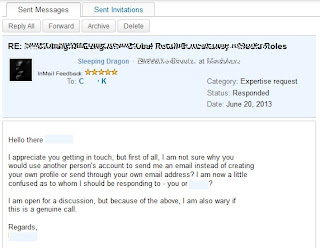 He then called me the next day. He apologized and explained that because I was not his direct contact, he could not get through me. To which I thought, what fucking bullshit as all that you needed to do was send me an invitation from your own account! Otherwise, there are many ways to go about it to get to me. (Hello? You know my name, I’m on FB too!)
I can’t remember much of the conversation (I wasn’t interested in the job), and he told me that he’ll get in touch again. I then got an email message from one of his colleagues to explain the job description to me and asked for my CV – making the entire conversation even more confusing as this other person who contacted me had a different company attached to her.
Some explanations and two correspondences later, I never did hear from them again.
It makes me wonder: is it just me being super old school about the protocols in recruiting or has recruiters become so blasé and nonchalant about how they ought to be conducting business when approaching potential candidates?
While I don’t expect an offer at the initial stage, a polite follow-up would be nice to maintain some sort of cordial relationship rather than just leaving the trail out cold.

This really ought to be one of the more bizarre recruiting experiences I have ever encountered.