This time, all seemed relaxed, calm and orderly. There was no rush to it and I was prepped up pretty well.  Most important of all, I was not doped up out of my head. I was lucid throughout the entire process and this time round, I did not fight with the Anesthetician. 🙂
In fact, I had one of the most experienced Anesthetician on board (she is 74 years old! When she told us her age, I had a mental image of shivering hands trying to administer epidural on me on my spine and missing the mark!). She was gentle, kind, reassuring and despite her age, still extremely alert, chatty and lucid. She took the time to explain what she was going to do and how it would make me feel. Most of all, she very kindly accommodated to my request of wanting to have Silver Bullet around with me for the entire procedure. Having Silver Bullet with me the entire time was one huge comfort factor to calm my nerves whilst at the operating table – particularly at the point of when she was administering the epidural.
In no time at all, Dr. Ah-Chai walked in, worked on me and pulled Squirt out.  I was done in no more than 40 minutes before they isolated me into the recovery room for 2 hours. I like the fact that I was completely lucid and alert the entire time, and none of that doped-up feeling nonsense.
The only difference this time was that I barely held Squirt after they pulled him out. And that was only for a few mandatory after-delivery pictures. 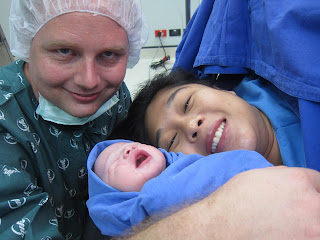 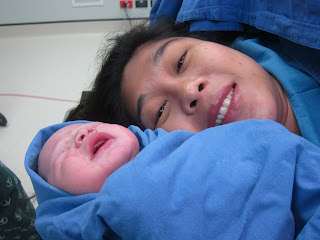 After about half an hour of being isolated in the recovery room, I started breaking out in sweat and was feeling so nauseated that I was throwing up almost all of the time – rendering me useless to hold Squirt for his first breastfeeding session while in isolation.
The nausea and vomiting lasted for at least 2 more hours after that; an apparent side effect from the anesthesia. The sweating thing continued for a good 3 days – they came in super hot flushes, especially at night. All I know was that 2 drops of morphine was being used in the epidural and that had caused the side-effects.  The dizziness lasted for at least another day.  All of which I did not experienced in the last C-Sect.
What was different this time round however, was the fact that I regained the feeling to my legs a few hours after the surgery. In the last C-Sect, the feeling in my legs had only returned the next day.  By about 3 pm that same day, I was not feeling any sort of excruciating pain and could also lift myself up in bed – something which I was not able to do in the last surgery, at least not until a few days later.
The IV Drip and the catheter were both removed by noon the next day and within the hour after that, something amazing happened. Despite being a little dizzy still, I could actually move myself from the bed, put both my feet down on the floor and walked that first few crucial steps to the bathroom!
I was beyond relief! What was great about it this time was that before the end of the day, I was already able to walk very, very slowly to the nursery which was about 10-20 meters away from my room.  Quite a feat considering I’ve been cut opened at the abdomen 30 hours prior!
I probably was walking at one-step-a minute-at-a-time, but hey! This was definitely and considerably better than my last C-Sect experience 2 years ago.
4 days after the operation later on a Monday, I was ready to be discharged. And by Monday 4.30 pm, we all went home, with a new baby in tow.
It has to be said that my experiences with both C-Sects have been on two extremes. Granted, had I not have had such a traumatic experiencewith C-Sect before, I think I would not have believed that recovery would have been so difficult and hard if I were to base it on this experience alone. If it weren’t for my previous experience, I too, would also likely to believe that those who said they a were not able to get on their feet 3 days after the surgery would have been just an exaggeration.
I don’t know what it was that made such a stark difference. The only thing I could think of was the fact that I was a little bit well-prepared mentally and relaxed. On the hindsight, the type of anesthesia used could also play a very important factor as to how the whole thing played out. Who knows!

In any case, everything turned out well. And that, my friends, has been my not-so-amazing-birth-story of all time.

No going ooooh..and…ahhh of how beautiful it was to have the perfect and beautiful birthing experience. Mine was just straight-off clinical and actually, I’m not so sure if I would even call it birth. Truthfully, it seemed more like an “extraction” of a baby than anything else.
Whatever that was, it doesn’t matter to me. Whatever the metaphor that was used, birth via cesarean  marks the beginning of a new life.
I am cynical and,  at this point,  I am not actually looking forward to the first 6 months where we’ll yet again be subjected to a whole new world of unpredictability, trying to establish some  routine, breast-feeding, pumping milk, controlled crying, sleep training…and whatever else that comes with it.
Double the joy, double the chaos. Wish us luck.