These days, our living room tend to look like as if a bomb has just exploded with toys strewn everywhere across the hallway. In the day, we have almost given up putting her toys back in their rightful place as Spud enjoys making the mess, shuttling from one toy to another.

Some months back, we used to give her just 5 toys per day to play with, and so she would get almost different toys each day so that she will not get bored easily. It was a nice theory that, except that Spud gets bored of her toys after 5 minutes and will be looking for something else.

So, we gave that  5 toys per day idea up quite a while back, and decided to keep all her toys in a make-shift basket. Like most babies, she enjoys making a huge mess and like taking things out of the basket (never putting it back into the basket!), and having a few favourites to play with.

The amount of toys Spud accumulated since before she was even born is actually quite scary, given that we hardly buy her any toys, With only 1 out of 5 toys were bought by us and most of what she has were given to her as gifts, it now kind of look like those toys somehow seem to have mysteriously propagated on their own.

Despite all those myriad of play-things though, Spud still crave for human interaction and attention a lot. Hence, her attention span on those toys tend to be short and I reckon, those toys are more of a distraction for us than for her so we can leave her for a few minutes to attend to other things.

Toys, toys everywhere…I cannot wait till she is a little older to be able to train her to clean up her own mess at the end of the day. (Assuming that’s possible at all!*)

Funny how we have become tolerant of such mess; something which I don’t think I could ever condone before,  given they can be such potential hazard for adults!

Talk about having double standards.

(Okay, we DO clean it up at the end of the day; there is only so much mess we can take!) 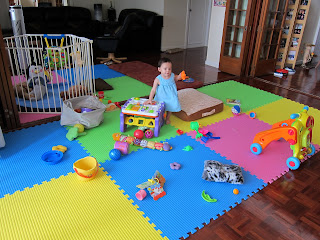 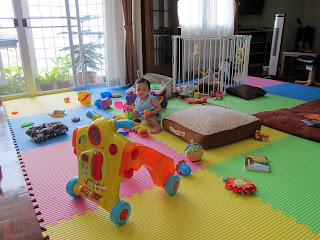