Finally a success in attempting this Dutch dessert apparently only served around New Year’s Eve as of the Dutch tradition. Seems like a really difficult snack/dessert to find even in Holland! Yummy as hell.

Silver Bullet has earned himself the title of “Dessert King” with his one-time attempt of Olliebollen and his plenty attempts in making Tiramisu. Strange to find out that the biggest secret of making a succesfull Olliebollen lies in the deep fryer!
Here’s the recipe of Oliebollen (literally “Oil balls”, deep fried dough balls) by the resident Dessert King: 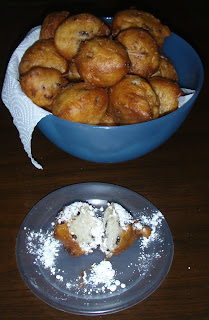