This is Fudge’s recent handiwork: 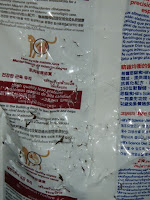 She first started her stunt last week by creating havoc in the store-room where we keep the cats’ food by eating through the plastic. We were wondering why she made a hell lot of noise, as despite having quite a full-bowl of dry cat food, she just would not let up! She would not quit ransacking the store room and strangely, instead of attacking the cans of WET food we have in there, she went straight for one of the bags! Later on, Silver Bullet discovered that the reason why she did what she did was only because she wanted some F.R.E.S.H food… We could only shook our heads in amazement.

Just this evening, she created the ruckus again. When Fudge creates a din, boy!oh!boy! did she demand for some serious attention. And trust me on this,  she can be the most annoying thing in the world. We were wondering why she kept screaming her head off as Silver Bullet had already topped up her bowl with fresh cat food, only for her to sniff at in disgust and immediately walked away. She then started clawing and eating through one of the bags again. The only strange thing though  was that she did not immediately go for the first bag in line, a “Hairball Control” bag. The very same variant which we have been feeding the cats intermittently for a couple of weeks now.

This time though, instead of  attacking the first bag she saw, she picked out the one in between. Somehow, as strange and morbid as it sounded, she seemed to knowingly select one of the bags with an “Optimal Care”  instead of the “Hairball control” variant. While Andy and Donut could not care less, it was as if Fudge was trying to tell us something! We speculated on this for a while, and perhaps “Optimal Care” tasted better, but thought that it was a little bit too far-fetched. After all, this is Fudge we are talking about. She’s a trash can. She eats anything, and hardly fussy about her food.

The more we ignored her, the more noise she made. She was becoming more than just a handful. She was just a relentless tyrant! Given the bag already had plenty of holes in it, we just decided to mix the 2 variants together and top-up the bowls with more of the “Optimal Care” variant. Lo and Behold! Fudge went straight to her bowl, ate enthusiastically and there was not a bleep from her thereafter!

I don’t know whether to laugh or to cry at her antics.

Oh! and by the way, the cats DO shed their fur like crazy when they were fed with the  “Hairball Control” variant of the Science Diet brand.