One of the biggest draw about going home is seeing my old friend, Maxwell again. He is such a sweet , sweet, darling not-so-little boy and has been with the family for about 9 years now. This is one cat that’s always up for a little bit of misadventures at times with his super friendly and trusting nature. Currently, he is a little on the obese side rolling in at about 10kg so far 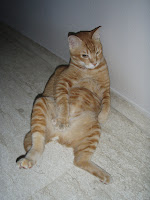 This bugger likes to sprawl around at home or on his chosen human lap when he is not out of the house. He has this funny habit of meowing rather loudly at anyone who walks past him without petting him if he so happens to sprawl in your way and you ignore him. It is really funny to watch him do that and shock whoever that person in question is – it’s as if he does not like you to trespass his area without a simple hi. Usually, he’ll purr rather than meow in annoyance at you if you just give him a pet or scratch on his head when you happen to walk past him as he sprawls away.
He is also one of those cats who takes an instant liking to Silver Bullet. I am certain he recognizes me as his human choice once when I’m home as he does call for the needful attention. But somehow, he seems to struggle in making his decision of who he should be focusing on when he finds me sitting next to Silver Bullet. While he walks towards me, looks at me and purrs with one paw on me, he has his other paws and backside on Silver Bullet as if to say to me, ” I know I know you and I do like you…but I kinda also like him too. Maybe a bit better“. No bonus points for guessing who Ah-Max decides to snuggle up to in the end. Ahhh! The antics of a cat. 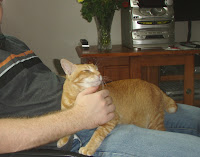