Sometime ago, I mentioned something about “putting Spud in her place”  which I thought was a rather interesting piece of story to share after experiencing a violent rejection from my own child.

I am not sure if “disciplining” is the appropriate word to use, and, it almost seemed absurd to have to put that label on a child who was barely 18 months old then. After all, an 18 month old does not know or understand anything right?

If you have read the story, you would have a background as to how Spud behaved towards me for a rather long period of time. It got worse when we were on vacation in Holland; and after several continuous days of giving in to her whims, letting Silver Bullet handle her as I watched from the sidelines because she absolutely did want to have anything to do with me when Silver Bullet was around,and at the same time watching Silver Bullet getting torn apart while she continued to violently reject me  (she was sick, so it was an easy excuse), I decided that enough was enough.

It was time to take charge, stop her nonsense and this was what we did in our attempt to establish some boundaries with a very strong-willed child:

Now, here’s the thing: Spud tend to behave rather well with me when Silver Bullet was not around, and she acted up only in the presence of  Silver Bullet. While I sometimes indulge her whining, I very seldom cave in to her. I have noticed though, that the more I gave in to her, the more she tend to act up and the more she pushes my buttons.

Me being me, I don’t have as much patience as Silver Bullet. So, when she gets a bit too much to take, I usually would sit her down, put her to my eye level (a tip I got from Super Nanny series!),  raise my voice  – enough to stop her in her tracks, and in a very stern voice, tell her enough is enough without having to scream my head off at her.

This is the bit when she would (usually) wail out in distress after being “scolded”. If she is only with me, then , she would tend to cry out for a few minutes more, and I would usually be holding her shoulders firmly and stroke her back while telling her repeatedly to calm down in a very calm voice. She would then put her head down and sobs quietly. More often than not, she would stop crying and soon enough, without warning, will likely to flash me a sheepish smile.  It is then I know that she has calmed down. A kiss, followed by a hug and a sorry is then in order and we are good to go again.I tried this tactic several times, and I found that it worked very well each time I am alone with her.

However, this technique does not work very well if there is someone else in the room. I am always the impatient, stern one, and Spud, bless her,  KNOWS how to work the system.

It used to be that she would immediately go to Silver Bullet for comfort, and without a doubt, Silver Bullet has a lot more patience to deal with her, and so would usually pick her up almost immediately – mostly to stop her from prolonged wailing because when Spud cries, she cries her bloody lungs out and wake the dead.

So, on that one fateful morning, after watching Silver Bullet from the sidelines in trying to get some food in her while handling her unreasonable temper tantrums, and sensing that Silver Bullet was getting supremely frustrated, because nothing worked, I intervened and told him that I’ll handle this my way by just forcefully removing Spud from Silver Bullet. While others believe that she was just a little kid who was a little under the weather, I was convinced that she was just pushing it.

She was strong – she screamed her piercing screams , deafening me in my ears and she kicked and she pushed me away while I held on to her. At that point, Silver Bullet just removed himself from the scene for a few minutes as he has HAD it.

Spud was none too happy, of course. I kept my cool and I applied the same technique I mentioned earlier. Silver Bullet then re-joined us, and this time what he did different was instead of trying to comfort her and taking over from me so I could get a breather so-to-speak, he too, had that stern voice telling her, “Spud, enough!”. Then he calmly told her several times to listen to her mother as I tried to keep my grip on her. He flatly refused to pick her up when she reached out for him several times, and,  every time Spud cried bloody murder when she did not get her way, he maintained his stern tone of voice and kept her at arm’s length while I continued to be the one holding her.

After what seemed like hours of a crying fit (actually within 20 -25 minutes), she finally “got it”. She kept her head down and started sobbing on my shoulder. And, after a while, even gave up trying to reach out for Silver Bullet when she realised that Silver Bullet would not cave. I then managed to calm her down and even managed to feed her 2 jars of food!

I think that episode convinced Silver Bullet that Spud being sick was just an excuse, and she just needed to be put her in place. Spud did try the same trick a few more times later that day, and instead of me being the “bad guy” this time, Silver Bullet kept up on not giving in to her, using the same technique.

These days, so far (fingers crossed, touch wood), a low, stern voice and saying “enough!” with some punch of authority is enough to give her the message that unless something is terribly wrong,  her whiney behavior will not be tolerated.

It does not work all the time, but it does work most times. On our end, both Silver Bullet and I recognise that we need to work together on this, support each other and be consistent with her. We also just need to be conscious that we don’t over-use the technique and only use it when push comes to shove.

So, if parenting is tough love, so be it. For us, we recognised that she is a strong-willed child and for a tough child like Spud, she just needs tougher parents to will such measures in place.

It is amazing what that little change in technique has done. She has since been nicer to me – a LOT nicer, and  she seems to get it when we mean business.

I guess the discipling has already begun; albeit a little bit too early in mind. God knows that I hope we did the right thing in raising this little rascal of ours. 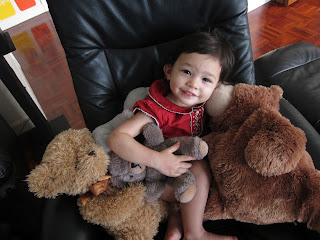