Our 9 month old Squirt is nothing but a busy, busy baby. He is so busy that when we try to pick him up to feed him his milk, he cries, screams and wrestles us up in protest because he does not want to be kept away from the floor; even if he has not fed in the last 3 hours!.  It would usually take us several tries to make him drink his milk, and even so, it has been quite a struggle as this little fella gets so distracted so easily. Urrrgghhh!

This must be the most annoying, not to mention tiring age there has to be in terms of baby development  – he is mobile, constantly on the go, cries bloody murder if left in the playpen, grabbing everything that is within his reach, determined to do whatever it is that he wants to do, sometimes don’t really know what he wants, and left us wondering and guessing what he exactly wants.

Squirt’s our little bulldozer – he bulldozes his way through by clambering over obstacles without any hesitations. He is now walking around while holding onto furniture and walls, and even letting go momentarily while trying to stand without support (verdict: fail! Not there yet). There really c.a.n.n.o.t be ONE second where he is not being watched as he is getting too quick for us.

These days, the house is also getting noisier and livelier than usual as we see the two kids interacting. Squirt loves chasing Spud on all fours, and Spud loves teasing him and running away from him while laughing her head off. As silly as they look, they both end up laughing wildly – giving another reason for Squirt to not want to feed when the time comes! He is walking (supported!) like a champ these days; in fact, he is practically running being supported with both hands.

Like Spud, teeth seems to come a little late for Squirt. 9 months and still nothing. And I reckon, those tiny little teeth are probably going to cut through when we are up in the air on the way to Europe; promising us of another memorable journey on a plane. Oh joy! 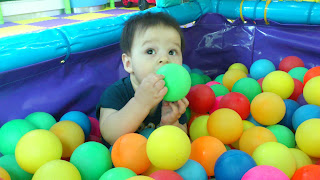 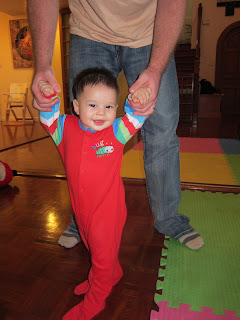