The days of when Squirt was able to stay where I last plopped him is now long, long gone. Squirt’s now a little critter and crawling like a champ. Just a week after turning 7 months, he started to pull himself up to a stand, and, he has not stopped practicing since.

By now, at 8 months old and in between crawling, he is cruising comfortably along anything and everything within reach just because he can, and now trying to use only one hand. He has also figured out that if he loses his balance while standing and not able to reach anything to maintain equilibrium, he would need to lower himself down to a squatting position. Sometimes, he forgets and tumbles over.

Squirt loves his sister – he lights up every time he sees her and is happiest when he sees her running around like a headless chicken. He laughs when she plays “catch” with him – as if he understands the game perfectly. He loves watching her and I think Spud is his biggest motivation to learn how to walk as fast as he can!In fact, he could easily walk some serious steps when supported.

He has been quite the blabbermouth since he started crawling. From simple cooing, his babble-vocab now consists of sounds like “ Tataaaaata“, “Mmmmmaaaamaaa” and”Daadaaa”. He has also been very vocal when he comes to things that he does not want to do. He screams, he struggles, and he scratches and he pushes.

Changing his nappy and cleaning his bottom has become near impossible missions as we struggle to keep him on is back. He gets super annoyed when we try to feed him while he was busy doing something else. He is almost always distracted and could hardly ever finishes his bottle of milk in one seating these days. 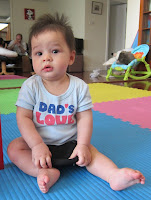 Otherwise, Squirt remains our pleasant, happy, shiny and smiley child. He is finally sitting up (and it has been hard to capture a picture of him sitting!) – but not for long, for he prefers to crawl around or continue to improve his standing and scooting skills.

At 8 months, still no signs of any teeth. He has, however, begun to imitate facial expressions – like scrunching up his nose and purse his lips all at the same time while sniffing up as hard as he can (a comical sight). He seems to know what “kiss” means as when you ask him for it, he would clumsily plonk his face on you and give you a slobbery kiss with his mouth open. Endearingly cute.

Did I mention that Squirt is a very happy and smiley baby yet?