Our little cheeky monkey is keeping us on our toes. Whilst she is more than capable to play by herself and be left alone for a short while as we watch her from the corner of the room,  there are moments when a heart attack (for the parents) is imminent.

Like when she decides that it is fun to do somersaults and back flips with her head positioned right at the edge of the couch or the recliner chair.
Like when she thinks that it is perfectly OK to reach for a  rather heavy-set glass jar on our dining table and then tries to hold on to it by hanging on to the lid with just two of her tiny little fingers.
Like when she thinks that it is perfectly reasonable to turn on the fan and tries to poke her tiny little fingers into the gaps on the cover of the fan.
Like when she finds that it gives her such adrenalin rush to RUN like a flash from one corner of any couches to the other corner,  almost slipped and may come crashing down on the glass table because she lost her footing while attempting that dash.

Like when she KNOWS  that she was not supposed to be doing something but attempted to do it anyway , perhaps just to see how you react. This happened at school when I picked her up the other day.  I was still trying to sort out her bag 2 meters away from her, and after putting on her shoes and despite me telling her to stay put and wait for me before she headed out for the door, she defiantly walked around me and ever. so.slowly. inched towards the gate (which essentially leads to the main road) WHILE looking at me with a “watch me and what are you going to do look” as I scrambled to get myself unstuck with her bag. I roared a stern holler as she turned the knob as she continued on putting 1 of her foot OUT of the door, while still eyeing me cautiously. I managed to yank her back in time and royally chided her for it. She was not too happy.

But! She has to know that some things are just not negotiable.
Spud jump-starts my heart way too often these days, resulting in me screeching and screaming as a reflex, more out of fear and anxiety rather than anger.  Although I am quite an extreme nutcase when it comes to safety, it sometimes makes me wonder if I am just being protective. Road hazards aside, I sometimes wonder if I should just let her be and let her fall. At the same time, knowing how fearless and brazen Spud can be, the way she might fall when she did any of the above is not something I want to imagine happening for the fall may jolly well be quite a bad one indeed.
I’m thinking that Spud is also asserting herself more these days, and I’m sure she thinks she is an adult. She gets a little annoyed when you call her a baby and will come back with a retort, “No, not baby”. She  does not want to be read to anymore at bedtime, preferring to do her own flipping and then telling us when she is done with her books before she starts climbing (trying to!) into her bed.
She is also starting to express herself better. Like when she tries to force me out of my own chair (whining unhappily away with a “Mama, no sit! No sit!”) and asking me to sit somewhere else so that she could sit in it. She won’t stop whinging and trying to pull me out until I get off my arse.
Her understanding of consequences has also somewhat improved in my observation. Recently, when we told her that she’ll not get to watch Penguin (Happy Feet) and Monkey (George the Monkey) until she eats her lunch or dinner (which seems to be a constant challenge for us), she seems to understand that and obliged by opening her mouth.  So far (knock on wood!), that trick had worked and we have told the nanny to be consistent with that as well.
When she could not stop whining and crying the other day after she woke up from her nap, instead of me losing my head, I just told her calmly that she can continue crying and be sad and everybody will not be happy;  or that she stops her nonsense and we can find loads of other happy things to do. I told her to choose and I’m just going to wait till she stops crying as I am not going to do anything. That seemed to get to her.  And almost immediately, the crying stopped (I had to grin when I saw the unexpected effect and gave myself a pat on my back!)
Spud, despite all that, bless her, has not shown any signs of further rejections, and if anything, she has been quite kind and nice to me; asking for kisses and hugs. The other day, when I put her to bed, she melted my heart when she said, “Goodnight, Mama”.

With her soft, angelic voice accompanied by such earnest grin on her face, she had me bait, line and sinker! Endearing.

Just like this picture here as Spud insisted that she was going to try to carry that little kitten in her hands and shower the little bugger with kisses and affection. 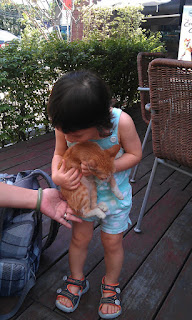 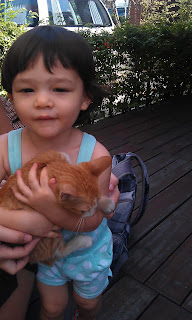 And I thought I had nothing to update in her 21stmonth of life!