Our little 14 month old trooper has turned to be this one affectionate little boy. Every so often, Squirt would come up to me, rests his head on one of my shoulders for no reason at all, and with a little soft voice, he goes, “ahhhhh” at the same time. He would usually rest his head for a good few seconds before he troops off to whatever tackles his fancy.

Sometimes, when we open up our arms as a gesture to request him to come so we could give him a hug, he willingly complies. He would then scramble quickly into our arms, wrestle his way in, pry his feet into our legs if we are sitting cross-legged, and when he finds  a comfortable position, he plops his bum onto our lap for a good few minutes before he  gets himself distracted with something else.

Last month has been a little rough when it comes to food and eating, and as I discovered, it was mainly because he has gotten to a stage now where he wants to do the feeding himself. If I give him a spoon and a bowl filled with a little food for him to practice feeding himself, he would willingly allow me to feed him at the same time. Same goes if I leave him grains of rice or yoghurt melts or biscuits on the table for him to pincer pick them and stuff them in his mouth, he would happily take a bite from me every now and then. Sometimes, he would insist on having the bigger bowl – he knows where I scoop his “real food” from and he will not relent until I give it to him.

I have since resigned to try to distract him with toys and books and what-nots while feeding him and let him make a royal mess of everything (much to the chagrin’s of Silver Bullet). I also find it a lot less stressful that way as if I insist on feeding him and not want to make a mess, the affair will make us both extremely frustrated. He loves his mangoes, and has recently discovered the joy of sucking mango seeds! 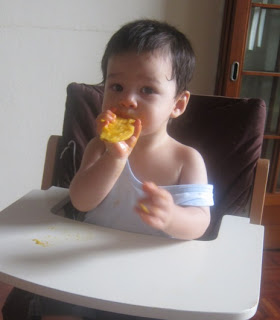 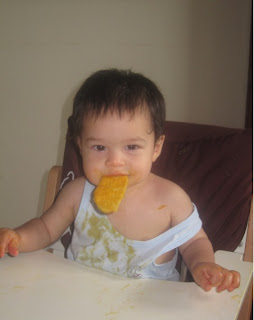 With only 2 bottom teeth, I am glad that he hasn’t shown any signs of rejecting any textured food. In fact, he seems to genuinely enjoy eating grains of fried rice and pasta. It seems that Squirt is enjoying his food and already is eating more or less the same, if not more, than what is sister is eating for her meals in terms of portion. His stomach bulges up so tight after each meal, and sometimes when I carry him right after that, I could hear the sloshing going back and forth in his stomach.

Squirt continues to babble, with the only audible, clear words being said in context, has so far been limited to “Mama”, “Papa”, “Bye” and “Yaaaaaaaaaaaahhhh! (said in gusto whenever he achieves something)” He loves playing stack-ups, Duplos  and he continues to improve his motor-skills by putting things together and then breaking them apart again – something which, I remember, hadn’t interest Spud one bit when she was at this age.

Whilst Spud’s more like a dare-devil, Squirt seems to be a little bit more cautious and calculated in what he does. He does not seem as reckless as his sister, and is usually more composed. While he has no qualms with exploring, he tends to carefully tread lightly with the unfamiliar until he is confident enough to do it all by himself.  If he knows that what he is about to do is something that he knows that he shouldn’t do, he would usually stretch out his little hands, pause and then look at you intently in the eye as if he is studying your face while he waits for a reaction. To his credit, whenever we cautioned him with a cautionary yet gentle “Aaaaaaacck….”, he would, 7 out of 10, withdraw his hands from the objectionable distraction; only to try it again 10 minutes later.

As cautious as he is, he has also demonstrated his confidence and capability in climbing over chairs, couches and over us just to get to what he wants. And when he doesn’t get what he wants, he would cry his saddest cry with the most saddest facial expression ever, and as soon as we carry him up, he buries his head on our chest or shoulder. (Doesn’t that just make it an awwwwwwww moment?)

This little trooper has won me over; hook, line and sinker. With his cheery disposition and an always smiling face, Squirt has really been such a joy to have around.