I knew about Dream Theater when I was 17 years old, and while I liked their music, I was not as crazy about  it as I was with the likes of Green Day, Pearl Jam and Tool to name a few. (Different league, I know!)

I knew a few of their songs (i.e Dream Theater’s) , but perhaps, at such a young age, I could not have understood or even appreciated the hype of their musical talents.

For a long time, Dream Theater laid buried under my subconscious. It was a case of sheer nonchalance  – I know them , I like some of the stuff they played. I did not dwell on it, and it was not something I’d listen to every day or go ga-ga with. And that was that.

Fast forward almost 15 years later, I was reminded of them again when Silver Bullet discovered it a while back and started playing Dream Theater’s music in his car. Bits and pieces of some of the songs I heard sent me back to my growing up years. Somehow, there were were fragments of the songs which took me back in time, and to the friends who introduced me to Dream Theater;  and I couldn’t, for the life of me,  pin-point the band that was playing on his car stereo.They sounded so good to my ears, but I had a hard time deciphering in my head some of the somewhat familiar melodies I was hearing ( I can’t believe I cannot identify the band!) and finally asked Silver Bullet what he has been playing in his car.

“Dream Theater!”, he said. “And, I love them! Their music is amazing”

Like a deer with a headlight, I went, “Really? That’s Dream Theater? Seriously? Gosh! When did you start listening to this? I remember liking them from when I was a teenager; only  I did not remember them being this awesome! They actually performed in Thailand a few years ago” 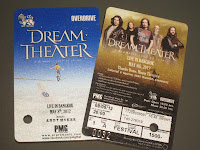 Fast forward to sometime later, we found out that Dream Theater was going to come to Bangkok for the 3rd time, and like excited teenagers, we both bought tickets and went to the concert last night.

It was a different concert. A league of its own. The crowd mainly consisted of those within our age group or older; which makes it seemed all appropriate.

A review I read described them as having achieved a “startlingly sublime synthesis of soaring and unmistakable melody, progressive instrumentation and aggressive heaviness unrivaled within hard rock music”.

I cannot have described it better.

The atmosphere was mellow and intimate (we were sitting around and not jumping like monkeys!), yet energized by the aggressive and explosive energy of awesome instrumental calibration. Their musical talent shone through on the instruments they played.

They have the craziest drum set I have ever seen and the drummer, Mike Mangini blew me away! I’m even more impressed by the fact that Mike Mangini, apart from being a musical genius in his own right (he set five world record in World’s Fastest Drummer), he  also has quite an impressive resume. Not only did he pursue a Computer Science Major and worked on programming software for Patriot Missile program, studied the links between human brain and body, as well as lectured at the Berkley College of Music and wrote two books.

The bassist, John Myung, plays a 6-string bass and was once voted as the greatest bassist of all time. Their guitarist , John Petrucci, apparently played a 7-sting guitar yesterday (Silver Bullet dropped from the sidelines and squeezed to the front to see up-close the number of strings he had on his guitar just to confirm suspicion), and the keyboardist, Jordan Rudess has got a very cool synthesizer which makes him look like keyboard wizard.

And when they play, man! Considering that they changed their beat and rhythm almost constantly, they were still so perfectly synchronised with their music despite what seemed to be like a challenging feat!

It was, all in all a brilliant concert! It went above my expectation and it definitely was an enjoyable concert. I can’t quite compare it side by side to other concerts that I have been, for like I said this one, was really a league of its own.

Here are some not-so-sharp snapshot of the concert. You’d have to squint if you want to make out that crazy-looking drum set in the centre… 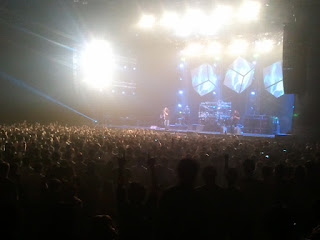 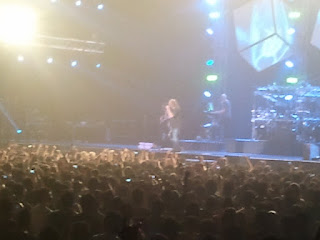 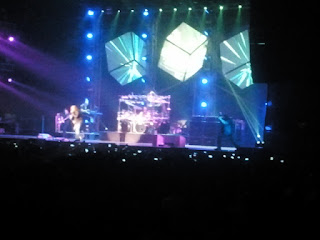 To continue using the site you need to read the revised version and agree to the terms.