It started drizzling and because of that, the journey home from the office took me almost an hour; and this was despite leaving the office earlier that day. And, after putting Spud to bed, another half an hour lost just waiting for a cab, and to top it all, it took me almost 2 hours to travel in that cab before I finally arrived at my intended destination. Without having a proper dinner.

Traffic was crawling, it was pissing rain and I was losing my patience at the sheer rush and madness it took me to meet up with Silver Bullet at the venue because of this one event: 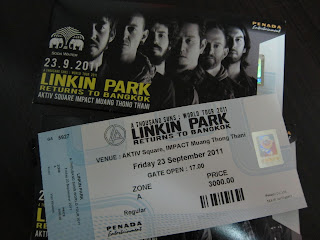 And it was an outdoor event.

And it was raining.

And we were cold and wet, and standing around with ponchos for a Linkin Park Concert.

And by the time Linkin Park started their performance, it was way past out bedtime!

I had gone to a Linkin Park concert once in Singapore when they first played there years ago. I remembered that it was one which was short (about an hour) but full of energy. I remembered being dazzled by Chester’s extremely high energy level and his powerful vocal. I remembered loving the concert and was actually quite disappointed when it ended rather abruptly. I remembered walking out of Padang (venue where they held the concert) in a daze of amazement wondering where the hell he got such massive energy. (I think I have an idea now!)

Last night’s concert was, in my opinion, just average. It was nice to hear them live again, but I did not see the same energy in the very same songs which they had performed before. In fact, I thought they were pretty mellow. It was, all in all, just okay, and perhaps even a little over-priced.

I did not leave the concert with the same buzz I had with Muse or Green Day. Or even Michael Buble (Yes! dig Michael Buble.). It was, in my mind, a quite easily forgotten act.

But it was still a nice event to go to on a Friday night. It felt like a long overdue date with the husband. 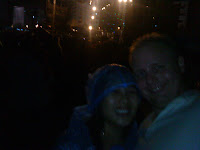 We were in a nicely large outdoor, free-standing venue. It was pissing rain. We were draped in a 50 baht ponchos and by the end of the night, we both got really sticky, wet and smelly from the rain. A very agreeable atmosphere and fashion sense to get caught on a date!
As soon as it ended, all we wanted to do was get home quick, have a warm shower and go to bed. Like I said, it was way past our bedtime and it is no longer normal for us to be out at such ungodly hours of the night.
That was about as romantic as we both could get. I have to say though, we still had a very nice time together; being smelly and all! And with a very sore feet to boot from standing for hours on end, despite wearing flat shoes.

(And I digress here: I saw so many females in HEELS and STILETTOS! Linkin Park. Heels and Stilettos….hmmmmmm. Seriously?It was a friggin concert; LINKIN PARK –  not a fashion show, not Kylie Minogue or Madonna. And no chairs around. Free friggin standing. Raining.Are.You.Crazy?)

Admittedly, we cursed ourselves the next morning as we woke up tired from the short night we had when our organic alarm clock started to squeal before 7 am to let us know that she is ready for another day…

We saw parents bringing their 6 or 7 year old kids to the concerts, and there was this one kid having a blast sitting on his/her father’s shoulder the entire time.  Screaming, jumping, grooving with “Rocker” hand sign and all! It was an endearing sight, and for some reason the thought of being able to bring Spud along 10 years from now is an appealing thought. Something both Silver Bullet and I are actually looking forward to!

And when she gets to that age, we certainly are looking forward to us being able to sleep in again.

To continue using the site you need to read the revised version and agree to the terms.

We (GrubbsnCritters.com) do not share personal information with third-parties nor do we store information we collect about your visit to this blog for use other than to analyze content performance through the use of cookies, which you can turn off at anytime by modifying your Internet browser’s settings. We are not responsible for the republishing of the content found on this blog on other Web sites or media without our permission. This privacy policy is subject to change without notice.